I’ve been really good about reading books off my bookshelf. So far, I’ve only strayed a little bit to read The Girl in the Green Raincoat, but I think I’ve earned it. I did buy some new books adding to my book pile already reaching epic proportions in my tiny apartment. I also brought home a sizable stack of books I had left at my mom’s house. Luckily, those books are read, so now I just need to find a place to store them. =/

4. Not Buying It – Judith Levine

Knitting has been slow for me this month. I spent a lot of time working on a puppy sweater for my friend’s little girl, Penny. This was my first ever dog sweater and it really gave me some trouble. I haven’t bought any new yarn since the Knitting Convention in Feb, but I haven’t really used any of my current yarn either.

My other crafting sessions have been making buttons. Thanks to the wonderful Chronicle Books, I won the Button Factory from a giveaway on their blog last week.

Comes with buttons, fabric, and the handle button presser. 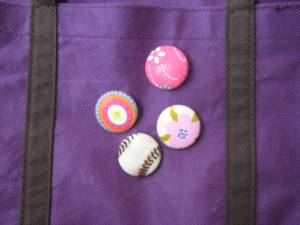 The buttons! This is a great way to use up scrap fabrics (or fat quarter pieces). I plan on adding these buttons to my knitting projects. My favorite button is the baseball one. I think it deserves its own close-up. =) 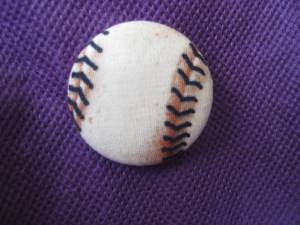 How perfect is that?

You can find The Button Factory available on The Chronicle Books site, at Urban Outfitters, and at Barnes & Noble,

A Soft Place to Land – Review

During a brief vacation visiting the Grand Canyon, Naomi and Phil Harrison board an airplane that soon crashes into the rocks, ending the lives of a couple defined by their never-ending, and passionate love for one another. During the funeral, their daughters, Ruthie and Julia are shocked by the provisions of the will that split the sisters from each other. Julia is sent to Virdin, Virginia to live with her birth father, while Ruther is sent to San Francisco to live with her aunt and uncle. The novel spans two decades, detailing the rift between the sisters as they learn to cope with their loss. The rift between the sisters is more than just the distance in miles between them. The rift also effects their emotional connection to one another.

The novel starts with the girls living in Atlanta, Georgia detailing what they believe were the last moments of their parents lives. In morbid detail they try to piece together what their parents last ate, said and felt before the plane crashed. Thick as thieves and overprotective of each other, the girls are inseparable and are shocked when they learn they are being torn apart due to the will. Although it had a slow and somewhat repetitive start, I really enjoyed this novel, especially once Ruthie relocated to San Francisco. I enjoyed all the references to the city and the Bay Area. I also loved witnessing Ruthie’s transformation into an adult during her teen years in San Francisco. The comparisons of life in the Bay Area versus life in Georgia and Virginia were really eye opening to just how snobbish the Bay Area can be. Being sent to live in rural Virginia with a negligent birth father and an “evil” stepmother did not help Julia learn to heal from her loss of not only her parents, but also from the separation of her sister. Ruthie, meanwhile, is sent to a thriving city filled with new experiences daily with an aunt and uncle that care the world for her.

One scene I particularly loved was Julia’s first visit to San Francisco. Known as the wild-child-older-sister during their time in Atlanta, you could really feel the rift between the sisters during Julia’s time in town. Much to Ruthie’s horror, Julia was ready to explore the Haight wearing torn jeans, a tie-dye shirt and sandals on a cold winter day. This day marked a rift in the sisters that would last well into their adulthood; past boyfriends, a stint in rehab, college and a published novel. The sisters accomplished much in their lives after the deaths of their parents and it was interesting how their lives overlapped at points, but then completely diverged at others.

Bay Area folk will love the references to San Francisco and Berkeley, and sisters will enjoy this novel for the hardships and struggles Ruthie and Julia overcame as they grew into adults.