This is a very cute and quick novel describing the modern dating scene as set in New York. The novel is written as a series of texts and emails. According to the introduction, Neel wrote from the perspective of Elliot while Skye wrote from the perspective of Madeline, neither knowing what the other was writing. The book was funny, the jokes were very on-point. It reminded me a lot of the sense of humor in Aziz Ansari’s Master of None TV show in Netflix. It also reminded me of Ceclia Ahern’s Love, Rosie novel, which is also written as text messages, emails, IM’s and other modern chat instruments.

I’d been on a wild goose chase, looking for a book that matched the humor and wry sarcasm of Where’d You Go Bernadette for a few years now. I thankfully found it in Brooke Davis’ Lost and Found. Set in the backdrop of Australia, this book tells the sad saga of 7-year-old Millie Bird, abandoned by her mother in a woman’s department store shortly after the death of her father. The book has three main characters, Millie, Agatha Pantha and Karl the Touch Typist. Each person has their own sad story and somehow their lives converge as they work together to try to reunite Millie with her long-gone mother. The book is funny, heartbreaking and captivating. The narrators were superb, particularly for Mille and Agatha.

This book was first referenced in AJ Jacob’s Drop Dead Healthy, and the topic has been of interest to me since. Dan Buettner visits a variety continents and small cities across the world, those with the highest population of those living up to and past 100 years of age to find out just how they have managed to live as long as they have, while still being mentally and physically fit at over 100-years of age. He goes to Italy, Japan, Costa Rica, even a small city in California. The secret to a long life? 1. Mostly vegetarian diet 2. A strong social life. 3. A sense of purpose (a reason to get up in the morning – volunteer work, family, other happy obligations. 4. A moderate glass of good red wine each day 5. Walking, walking, stretching and more walking. It’s not brain science. It’s common sense that we’ve forgotten in our bubble of highly processed foods and convenience methods of cooking.

The Tower, The Zoo and the Tortoise by Julia Stuart
Format: Audiobook / Narrator: Jonathan Cowley

Taking place in the infamous and tourist hot-spot Tower of London, Julia Stuart’s book is a quiet, introspective look at the lives of the people who live and work in the tower. The book started quite slowly, with a varied cast of characters and a rather blurry plot with no real path. It didn’t take for me to realize that like Major Pettigrew’s Last Stand, British books tend to be more about window snippets into the people’s lives, than about a major conflict, upheaval or occurrence. The main figures are Balthazar and Hebe Jones as they try to make sense of their crumbling marriage 2 years after the death of their young son. The supporting cast is full of color and humor, highlighting the rather dour and grim auras of the Jones. Despite its slow start, it’s a rather beautiful novel. Jonathan Cowley is a wonderful narrator. You can’t really go wrong with British narrators. There is just something so soothing and captivating about their accents. There is also the added bonus of historical tidbits about the Tower of London, from its menagerie to its cast of prisoners over the years. 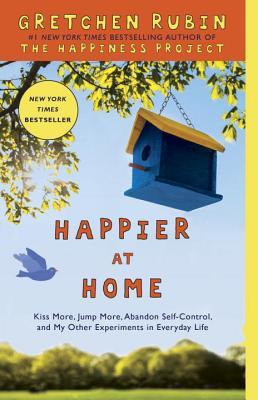 Happier at Home: How I Learned to Pay Attention, Cram My Day with What I Love, Hold More Tightly, Embrace Here and Remember Now. by Gretchen Rubin

If there is any one book I actually regret having finished, it has to be this one. Well, maybe Goodnight June, but this one as well. This book was incredibly myopic, superficial, elitist and uninviting in virtually every sense. I kept hoping for insights, for little gems of inspiration or change, but none was to be found. Rubin is best known for her other NY Times Bestselling Book The Happiness Project. I read and half-heartedly enjoyed that book. I thought I would give Happier at Home a try. I didn’t have any other audio books to listen to at the time.

I think if Rubin had written this as a long article, or a blog post, it wouldn’t be so bad. It might even have been helpful had it been shorter in length so much less in her head. Also, she should have branded it as being more mindful rather than being happier. She wasn’t unhappy when she started. She was still riding the high of her Happiness Project book being such a success. In the end, I don’t feel like she made herself any more happy than she was at the beginning. It did feel like she paid more attention to the incredible minutiae of her life and looked for happiness in random areas. At times it felt like she was nit-picking just to find something to complain about in otherwise easy life. A loving husband, great kids, a great apartment in walking distance to wonderful restaurants, libraries and more. She could travel, but doesn’t want to. She wanted to look for happiness in the small things in life. Its commendable. It’s a bit monastic. It was a big stretch because she already has so many wonderful and happy things in her life that rather than just appreciate what she has, she has to elaborate in boring detail all the pot-holes in her life.

I’m still stumped as to her target audience is with this book. Is it the low-income mother juggling two jobs? Is it the Park Ave mother with 2 nannies on the payroll? It’s somewhere in the middle, but leaning heavily towards Park Ave. mother. Although her Wednesday adventures outing with her eldest daughter sounded like a fun idea, tallying up the weekly admission costs for each and every place they went to every week had my head spinning. Her main source of happiness was purchasing Demeter Fragrance for her home. This book actually made me really sad and judgmental, which I don’t think was her intent. She did even include a disclaimer that her path to being happier at home is not the path that everyone should take. It’s just one person’s story. To be honest, the most helpful part of the entire book was the appendix at the end where she summarized her findings and her nine-month trial run at being happier at home.

The post, Book review: Happier at Home by Gretchen Rubin, first appeared on The Novel World.