Book Review: The House I Loved by Tatiana de Rosnay 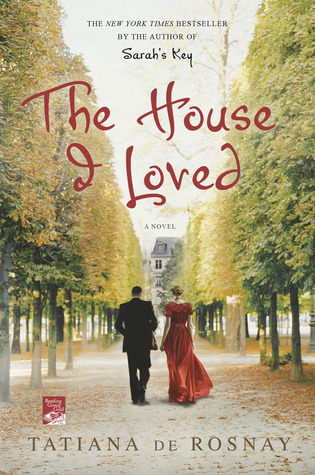 Set during a unique historical period in France, Madame Rose Bazelet is determined to save her husband’s home from the wrecking ball of Baron Haussmann’s Parisian Boulevard renovation project of the 1860s. Rose sets up a camp in the basement of her husband’s family home, and tells a moving story of her life. She recounts her days before, during and after meeting her husband and what has led her to her current state. She writes a long letter to her late husband, processing her thoughts, feelings and emotions as she waits for the crew to come and demolish her home.

This is my third and most likely my last book by de Rosnay. The first being, A Secret Kept and the second being, A Paris Affair. To be honest, I just haven’t had much of a connection with any of her stories, as exciting and entrancing as the summaries and reviews sound. This book in particular was more dull than anything. It was neither great nor bad. It just was. I loved the historical era, its one I almost never come across. Historical books set in France are almost always about Marie Antoinette, or the 1920s. I would love to learn more about Haussmann’s renovation. How the public took to his drastic and dramatic alterations of their city streets. How people were re-housed, if at all.

In this book, we meet Rose. A typical, sweet French girl with a lot of baggage to her story. She had no connection to her own mother and similarly, has no connection to her own daughter. She seems lost, confused, but also stymied by social etiquette. She just doesn’t know what to do and does nothing as a result. I wish the story had more depth, more character development, more historical accuracies and factoids for me to contemplate. I think the book might have fared better had it not been written in Rose Bazelet’s voice. The writing style was too prim and descriptive to be passed off as local commentary. Also, I did not like being in Rose’s head for such a long period of time. She did not have a great many insights into the world around her. I would have liked to hear another voice, maybe a responder to the letters rather than it being a one-way conversation. I wanted someone to play devil’s advocate and defend Haussmann’s plans. I wanted there to be an external conflict. Rose’s internal conflict wasn’t that captivating.

The post, Book Review: The House I Loved by Tatiana de Rosnay, first appeared on The Novel World.

This entry was posted in Books. Bookmark the permalink.