I went to the annual Bastille Day French Festival in Santa Barbara this year, using it as a totally valid excuse to take my family on vacation for the weekend. The festival itself was incredibly fun. There were 3 stages for music, one dedicated to accordions all day long. There was singing, dancing, and cabaret and can-can style dancing on the other two stages. The food was delicious, although the vendor booths were a bit underwhelming. 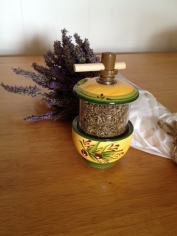 Although the entire event was justified by the purpose of this wonderful little herb mill. When I was in Arles a few years ago, I brought back two of these back with me. One went to a friend as a house-warming gift, and the other went to my in-laws. I’d regretted not buying a third for myself ever since we got back. I was absolutely thrilled to see it in a small little booth selling goods imported from Provence. It was hiding amongst tablecloths and other linens. I immediately snatched it up with glee and handed over my credit card. I’ve been using it everyday since. It goes well with salads and mozzarella cheese. We also picked up a bouquet of lavender. That has been well dispersed around the apartment, exuding the most calming fragrance in each room of the house.

The Festival itself was fun. There were so many people talking in French, it was amazing. A small part of me felt like maybe I was in France. Boys running around, horse-playing and taunting each other in French. Vendors and customers sharing jokes in French, French music, pastries and crepes. We were only there for a couple of hours, but it was an experience. I’m not sure we’ll make the trek back down again in the future, at least not specifically for the festival. I’ll always make room on my calendar to go back to Santa Barbara though.

What I started reading

I’m about halfway through, but am debating abandoning it for another book. Its about all of the big names in the food industry at the time gathering in the south of France to talk about and influence the future of food in America. Its very gossipy and since the author is M.F.K. Fisher’s nephew…well, that adds an unsavory bias to the story towards certain people. I dunno. I may finish it through, because anything involving Julia Child is wonderful.

Set during the 1960’s, Populaire tells the story of a small-town girl with a gift for typing and her type-A personality boss with a heart of gold. Its a romantic-comedy, its witty and its quirky. Romain Duris has perfected the smug French smirk of disdain in this film. Deborah Francoise is absolutely charming in this movie. Seeing her skill and speed at typing, Rose’s boss Louis has her sign up for a regional typing competition. Although she doesn’t win the first round, he has her move into his house for 24-hour training sessions to perfect her typing skills, entering in competitions going to the nationals and then to the international competition held in New York. The movie is quite like My Fair Lady.

© 2015 by Nari of The Novel World. All rights reserved. You can also follow me @TheNovelWorld This was originally posted on The Novel World on 7/23/2015

This entry was posted in Books. Bookmark the permalink.