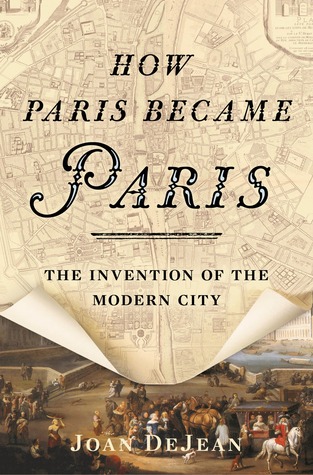 How Paris Became Paris: The Invention of the Modern City by Joan DeJean

How Paris Became Paris is a wonderful book for anyone interested in a brief history to the City of Light. DeJean’s book covers a lot of ground, focusing on the 17th century developments happening in the city. However, she doesn’t go in as much depth as say a history book. Her writing style is much more casual, although you’ll be inundated with interesting facts about the structuring of the city of Paris.

She starts with the Pont Neuf bridge, and from there, the chapters discuss the ripple effects of this bridge on French social society. The invention of this bridge quite literally paved the way for modern French interactions, fashion as well as development throughout the city. The widened bridge became the first in Europe to be of such a width as to allow the public to parade through the streets. It is as a result of this bridge, that the French started leaving their homes to go for walks. These walks led to the necessity of being fashionably dressed. The need for fashion led to the invention of clothing stores and the hobby known as shopping. The availability of shopping allowed for people of all class caste systems to be able to dress and intermingle with people above and below their rank. This intermingling led to many more social developments, particularly in relation to women’s freedoms.

The chapters have a very easy flow to them, picking up where the previous one concluded. I found them to be the perfect length. Neither too long, nor too short. There are a number of illustrations, photographs and maps dotted throughout the chapters to break up the text and help highlight the author’s opinions. The author has a clear love for the city, and it strongly reflected in her writing. Paris can do no wrong and had apparently been an inspiration to other European capitals over the centuries. I’d strongly recommend this to anyone planning a trip to Paris. Having some historical insight will make the tourist stops that much more meaningful.