D is for Edgar Degas

One of the leading artistes of the Impressionist movement that started in France, Edgar Degas is best known for his artwork of the ballerinas.

The Impressionist movement is probably my favorite in art history.  Although I am particularly partial to Renoir, Degas is definitely in the running with his depictions of both the public and private lives of Parisians. I was lucky enough to see some of his originals at the Musee d’Orsay a few years ago. Impressionist art is really the only movement where you have to see the brush strokes in person to fully appreciate the work, the effort and the inspiration and vision that goes into creating these masterpieces.

His work ranges from ballerinas on stage, to nudes bathing, to bronze statues. In the 1850’s, he took a break from his studies at the Ecole Des Beaux-Art in Paris to travel around Italy; painting, traveling and studying. In 1859 he returned to Paris, determined to make a name for himself. In 1862, he met fellow artist Edouard Manet at the Louvre, and the two who quickly hit it off were members of an avant-garde group of artistes. They met regularly the Café Guerbois along with: Renoir, Monet and Sisley to discuss the progression of art in the modern world and thus the beginning of the Impressionist movement began to take shape. 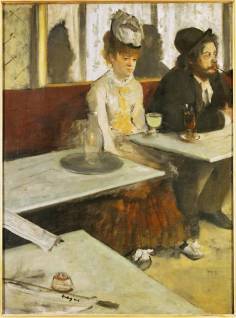