In which Chronicle Books showers me with gifts

March has been quite the Chronicle Books month for me. First I won the very awesome Button Factory, which produced such wonders and whimsies such as these buttons. I love buttons and now I love making buttons. =)

On Saturday I received The Baseball Scorekeeper; Introduction by Zack Hample,  text by Stuart Miller,  that I won from a Chronicle Books Twitter contest (follow them @chroniclebooks). This book is full of awesome, and it will rightfully go to my baseball fan fiance as a wedding present. he did go to Spring Training in Arizona for his bachelor party. Even though I won both items in giveaways,  I still consider all these lovelies from Chronicle Books as early wedding presents, since they are probably the best matches for our respective interests and hobbies, mine being old-lady crafts and his being baseball.

Here are some shots of the Baseball Scorekeeper: 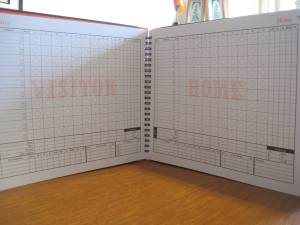 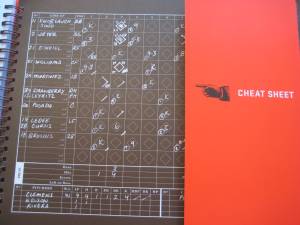 The inside scoresheets – Visitor and Home Team

The cheatsheet in the back of the book so that we can learn how to accurately fill out the pages!!